An absolute blast to ride and race, these X-Series Pocket Rockets are extremely fast and are quickly becoming the “go-to” bike for both entry level and racing pocket rocket enthusiasts. Built from the ground up to hand an increased weight load, for quicker cornering and blazingly fast acceleration, these little motorcyles are perfect for the entry level racer or weekend warrior.

All of the X-Series pocket rockets, which include popular models such as the X1, X2, X7, X15, X17, and X18, are scale models of their “crotch rocket” counterparts. The smaller, X1 and X2 for example, are approx 1/4 scale of the full size racing bikes where as the X17 is a 1/2 scale with a larger 110cc engine. We’ll go into more detail below, with a breakdown by model.

We’re lumping these two together as they’re both very similar pocket rockets. The X1 was the very first in a long line of really cool, full fairing super pocket bikes with Moto GP styling. Often called Ninja or the Ninja GT Super Bike, The X1 Pocket Rocket is often fitted with premium features like a headlight, chrome rims and exhaust. Speeds of 25-30mph are common with these mini pocket bikes. As with the X1, the X2 pocket rocket is fitted with a 49cc or 50cc 2 stroke engine. Electric start isn’t very popular on such small minibikes, so a pull start system is to be expected. The X2 is set above it’s younger brother with the addition of an optional CVT (constantly variable) transmission, which helps the X2 reach speeds of up to 34mph with a 200lb rider.

Initially launched in 2005, the X7 pocket rocket was an evolution of the X1 and X1 pocketbikes. At the time, this was the larged pocket rocket available, clearly the biggest in it’s class at 52 inches long. Still powered by a 49cc 2 stroke engine, performance upgrades improved top speed to a staggering 45mph with an average sized rider. Both electric and manual pull start systems were available along with a revised CVT transmission that provides both better takeoff power, improved accelleration and top speed. Because of the larger frame, load capacity was increased to allow for riders of up to 300 lbs to enjoy the rush of riding a super pocket bike. This was the “must have” 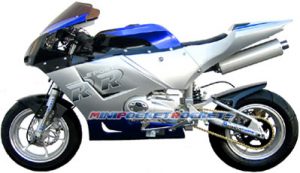 pocket rocket for a long time, until the X15 was built.

These Super pocket bikes are the larges mini bikes available today. At 1/2 scale with 110cc engines making 10-15 horsepower, these pocket bikes can reach top speeds of up to 70mph. The dangerously fast speed comes courtesy of either a CVT transmission or a 4 speed, hand operated manual transmission. From a distance, it’s difficult to tell either of these super bikes from their full size counterparts.

Starting with the X15’s seat height of 24″, which for most provides a rather comfortable riding position, and a top speed of 60-65mph; the X17 builds off of that with even more power. Both models usually enjoy street legal ammenities such as headlights, turn signals, a horn and electric start. Obviously it’s not wise to ride these miniature superbikes on the street, however for those with a racing desire there is the X18. The X18 Pocket Bike is essentially an X17 that sits alittle bit lower for a more aggressive stance, faster cornering with a stiffer suspension, and a refined torque curve for better power coming out of turns. Both the X17 and X18 are known to reach top speeds of 70+ miles per hour.